I bet Isaac Newton was the bomb in bed. I bet he was sitting under that tree, fantasizing about hiking up Mathilda’s knickers the night before when that apple came toppling down out of that tree.
After all, Newton’s famous Third Law of Physics, “Each action must have an equal and opposite reaction,” should be every lover’s credo.
Recently, I wrote a little piece I playfully called “Fishies: Wake Up and Smell the Pheromones,” about “dead fish” lovers who lie there. Woman On Bottom wrote, asking:

So… the chick is on bottom, the dude is on top and they’re having sex. He’s thrusting like nobody’s business. The age-old question remains: what is she supposed to be doing? Scratching his back? Moaning? Wrapping her legs around him? Rocking against him? Talking dirty to him?
How does she avoid this whole “dead fish” syndrome guys always complain about? What skills should she posess? And, is there a difference in the “woman on bottom”‘s job from fucking to lovemaking?

Well, Bottom, it was funny you should ask. I was kicking this idea around for a few days before you asked, and since then, I’ve just been giving it some thought. 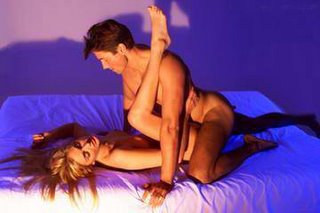