I wrote this late last night, when I should have been in bed. I was out for coffee this morning when The Guy emailed me with a link and said, “This will make you very angry.” Rightly so. It turns out the Supreme Court of the US has decided not to hear a case on internet-based obscenity, meaning that internet obscenity laws are to be decided on a local basis. IE, small towns can decide what’s “obscene” on the internet.
Think about this for a minute. REALLY fucking think about the ramifications of this, people. This is huge. You’re going to have Buttfuck, Idaho deciding on whether or not materials that are being used and seen by people AROUND THE WORLD are obscene… in the land of “free press.”
It all comes back to you. Your vote. It comes down to voting for leaders and politicians because you’re looking for a fucking tax break, but you fail to realize the implications of what that leader’s choices for life-long appointments to the Supreme Court are. Life-long: Meaning decades of deciding the interpretation of YOUR constitution.
You want to tell me that America’s passion for freedom of speech is greater than any other nation’s. Not anymore. Never has been. That’s the greatest lie ever told, my friends.
This year’s the 40th anniversary of the death of Lenny Bruce — a guy who met the wrong end of every obscenity law ever passed in the US. Four decades have passed, and this is the bullshit that’s starting to cycle back into action.
AGAIN, I ask you: Where is your voice?
The timing of that news is just strange, since I’d planned to post this today anyhow. A sad fucking day for freedoms, my friends. Know that. 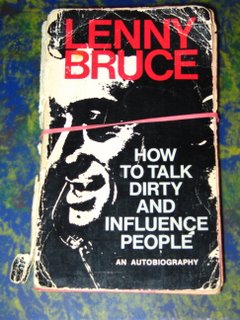 The writer I am today is a result of the reader I was then. To tell the truth, I’m barely a reader today. I seldom settle in with a book, but I hope to change that behaviour.
I recently took some time to organize my bookshelves, and this book in the photo, my tattered copy of Lenny Bruce’s How to Talk Dirty & Influence People, still stands up on display, right behind my grandmother’s 1955 rotary dial phone, which still rattles and rings anytime someone dials me up. Next to it, a first-edition of the Arrow paperback version of HST’s Fear & Loathing in Las Vegas.
When I was 18, my narrow, protected view of the world was shattered by HST, but then came Lenny. Like HST’s classic tome, it gets off to an unforgettable start – particularly if you’re an 18-year-old kid. Unbelievably, I had the balls to recommend this to my 14 year old student last week.

“Filipinos come quick; colored men are built abnormally large (“Their wangs look like a baby’s arm with an apple in its fist”); ladies with short hair are lesbians; if you want to keep your man, rub alum on your pussy.
Such bits of erotic folklore were related daily to my mother by Mrs. Janesky, a middle-aged widow who lived across the alley, despite the fact that she had volumes of books delivered by the postman every month — A Sane Sex Life, Ovid the God of Love, How to Make Your Marriage Partner More Compatible–in plain brown wrappers marked “Personal.”
She would begin in a pedantic fashion, using academic medical terminology, but within ten minutes, she would be spouting her hoary hornyisms. Their conversation drifted to me as I sat under the sink, picking at the ripped linoleum, day-dreaming and staring at my Aunt Mema’s Private Business, guarded by its sinkmate, the vigilant C-N bottle, vanguard of Lysol, Zonite, and Massengill.
At this tender age, I knew nothing of douches. The only difference between men and women was that women always had headaches and didn’t like whistling or cap guns; and men didn’t like women – that is, women they were married to.
Aunt Mema’s Private Business, the portable bidet, was a large red-rubber bulb with a long black nozzle. I could never figure out what the hell it was for. I thought maybe it was an enema bag for people who lived in buildings with a super who wouldn’t allow anyone to put up nails to hang things on; I wondered if it was the horn Harpo Marx squeezed to punctuate his silent sentences. All I knew was that it was not to be used for water-gun battles, and that what it was for was none of my business.
When you’re eight years old, nothing is any of your business.”

Lenny Bruce, if you’ve never heard much about the dude, was a pioneering comic who broke all the rules. The Jim Morrison of comedy, he had his ass busted for obscenity more times than Dick Nixon would proclaim he was not a crook. It was on his heels, on his ground-breaking sacrifices and legal hassles that Richard Pryor and every other comedian would follow. Without Lenny Bruce, there might not have been a Pryor, or a Hicks, or a Rock, or a Leary. Lenny Bruce said fuck you to the man, and he said what was on his mind.
These days, there’s something still admirable about someone with the balls to say “What you think is obscene is what others do behind closed doors.” As someone I quite like recently said, let’s meet at the corner of The 21st Century and Get Over It.
Laws of acceptability are drawn by people with the courage (or the accidental happening) to push envelopes in defiance of what accepted norms are. For instance, fucking can now be used as an adjective after 10 pm all because Bono accidentally said it as such during a broadcast of (insert irrelevant music awards ceremony name here).
But the ones who discover whole new lands, they’re the journeymen like Bruce because they’re the ones who consciously know what the accepted is, but choose to go far beyond it, consequences be damned.
You open to any fucking page, anywhere, and there’s something that even today is relevant. Me, my copy’s so fucking tattered it’s permanently mated with an elastic band, the only thing that holds it together. The page where the spine breaks clean in half, page 91, yielded this pearl from 1963, 10 years before my birth.

“Why don’t religious institutions use their influence to relieve human suffering instead of sponsoring such things as the Legion of Decency, which dares to say it’s indecent that men should watch some heavy-titted Italian starlet because to them breasts are dirty?
Beautiful, sweet, tender, womanly breasts that I love to kiss; pink nipples that I love to feel against my clean-shaven face. They’re clean!”

So many of us sex bloggers, we’re up in arms against this Moralizing of North America; the legislative attempts to arbitrate morality; this pitiful attempt to turn back the clock and eradicate sex and desire from the consciousness of the average person.
Got news for you, folks. We’ve been fighting this battle for decades. Whether it’s a brilliant writer and commentator like Lenny Bruce or a filthy fat fuck like Larry Flynt, the battles ain’t new, the war ain’t new, and the blood’s long from dry.
What’s different now, though, is the medium. Enter blogging. Enter podcasting. Enter streaming video. Now we have a voice. Now we don’t have to wait any longer for a voice crying out in the night, for a black-as-hell knight to ride in with a filthy leer and a winning argument. Now the undersexed, underfucked, randy-as-hell, crop-flogging, chain-wearing, paddle-using, nymphomaniacal, cross-dressing, same-sex fucking, porn-loving, and swinging folks, NOW they all have the ability to have a voice.
The thing about activism is that it’s not about ground breaking wide open in one fell swoop. Like any hole, it start with one push of the shovel. And another. And another. There will be rocks and boulders that limit progress, but with persistence, it all comes out. The greater the chorus of resistance, the harder it is to ignore. The greater the groundswell, the more ground we can break.
Unfortunately for the battle, Lenny Bruce died too fucking young. He should’ve died right around now, in his 80th year. Instead, a needle in his arm, he toppled off his toilet, and crashed to his death – a disgraced, bloated man who was mocked and ridiculed out of the mainstream, and instead, placed post-humously upon a pedestal by those who would continue to wage what was known as his crusade against semantics.

“One last four-letter word for Lenny.
Dead.
At 40.
That’s obscene.”

And it was. It is. Few people ever have the balls that Lenny Bruce lugged around with him, and it’s a crying fucking shame. And still, here we are, fighting for the same things, dreaming of the same freedoms as this long-dead Jewish-American comedian, in this, the 21st century.