This is the first installment of my new series, Unleashing Your Vixen. Please check that out before you read this. The next installment will probably be on Thursday at some point. That’ll have actual moves in it. This is sort of a tease towards that. 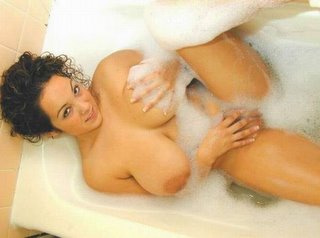 Ah… smell that? That mix of spring and long-stemmed red roses and perfume dangling on the wind? It’s spring (well, unless you live in New York, you sorry bastards). More importantly, it’s Valentine’s day.
I have issues with Valentine’s day and I’ll share that with you some other time. For now, though, it’s a nice thought that more people will be getting laid tonight than any other night of the year. Far be it for me to rain on your love parade.
In keeping with the Unleashing Your Vixen notion, these are a couple small ideas to put in the arsenal of their education. Preliminary to moves is the act of initiation. Vixens must take initiative from time to time — if not half or more of the time.

So, you’re on a first date, it’s going well. He’s cute, he’s sexy. Every time he smiles, you imagine what it might feel like to glide your tongue along the edges of those pearly whites. But you’re just a vixen in training. You don’t want to be the good girl who gets a kiss at the door tonight. Nah, right now, you wanna lay a smacker on this guy and see how challenging you can make it for him to have to walk to that door in two or three hours.
But how do you make the first move?
Have you ever noticed that guys almost always head to the john before they start making out with you on the couch? There’s like this switch: They usually relieve themselves before they get all worked up. It’s a pragmatism thing. So, you go before that happens.
Wanna be cute? Put some vivid-colour Post-It with a cute little double-entendre like “Help yourself!” on your prominently-placed bottle of mouthwash.
I mean, if you’re dating and you don’t have a prominently-placed bottle of mouthwash, then you’re doing it all wrong. Tasty kisses are nice, but only when it’s chocolate, wine, etc. Mouthwash is key. Guys’ll help themselves to the mouthwash 90% of the time anyways, but a little note? An itty-bitty green light? I doubt there’s many fellows out there who’ll pass up that chance. Now you just wait.
The “take me now” note always works nicely, in all its varying states. Another fun way to use notes to break the ice when you don’t know how to say what it is you want – say, for example, you’ve been in the relationship for a spell, a couple weeks or month or something, and you don’t want to wade through all the niceties and cuddling and such. You want sex, you want it hot, and you want it now, but you’re not confident enough yet to answer the door a little moist and oily fresh out of a bath, and naked, when he rings. So, a smaller step is needed.
You’re at home, you’re having a nice meal in. Just put a note under the plates at dinner, and ask him to clear the table for you while you step into your bedroom for some silly reason. Try something like, “If the dishes are working for you, continue, but if you’d rather be taking me doggy style, come and get it.”
You can be as dirty as you want to, but the fact is, a little dirty with a little nice is always sexy, always classy, and always lets you feel like you’re as bad as you need to be, without crossing too many lines in your so-called ethical sand.
Hell, you can include a note in your Valentine’s day card that has a list of things you love your partner doing to you. “Things I love that you do to me: Nibbling the back of my knees, biting my inner thighs, when you switch to a more aggressive thrust as you get closer to climax, when you nibble my ear while fingering me…” and anything along those lines. Exchange cards in a restaurant. Let him get all flustered and aroused. Take it a step further and put a couple things on the list that you’ve never done to him, but wouldn’t mind trying, and see where that takes you.
Being a vixen or a rockstar lover means doing little things like this. It means taking initiative sometimes to let him know that you’re wanting this as much as he does, if not more. Too many guys are left feeling like their lovers fuck them out of obligation, not desire, and your job as a vixen is to lower that average. Let him know. Let it be unmistakable: Sex is what you want. No, he is what you want.
Being a vixen, yes, it’s about the moves, the know-how, but it’s also an attitude. It’s a confidence you need to find in yourself, an awareness of the sexy being you have inside, and it’s a desire to let that part of you shine. It’s not about being a size four or wearing a Chanel dress or being a barstar at the club. It’s more real, more innate than that. Being a vixen is about being strong when you need to be, being demure when it’s called for, and knowing what cards to play and when to play them. Being a vixen doesn’t happen overnight, but one night can drastically impact your progress and really spin you in the right direction. Taking small steps like this could be a crack that springs a raging river from the dam that has been your sexuality up till now. Embrace the fissure, and don’t worry, it bursts wide open faster than you might expect.