I’m at that point of my depression that I’m realizing I have become the worst version of myself.
Of that, I am absolutely certain. 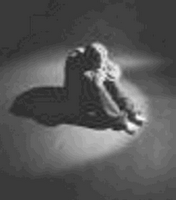