I had an end-of-the-night chat on Twitter with my friend Tris Hussey (@TrisHussey), one of Vancouver’s best WP blogging smartie-pants, about the strange life of being a vanilla girl in a sex-blogger-world.
It’s had me thinking since, which is why I like smartie-pants like Tris.
See, he thinks the world needs more sex-positive voices — especially from everyday-peoples like me, I guess.
Me, I still have a hard time swallowing the role. So to speak.
That’s what my whole journey in sex-blogging was about. Discovering my own sexuality in a more positive way, where I no longer judged my tastes or worried what things might suggest about me ethically or morally.
It was a hard fucking battle and I’m not even sure where I am on that road right now because I’ve been abstaining for too long. Just… because. I didn’t want to think about sexuality. I had to think about me.
But I’ve thought about me. I’m a better “me” than I’ve ever been. Now I’m ready to be more. Again.
I think the reason my sex-writing has been so successful at being applicable to the average person is because I am one. I’m not interested in burlesque. I couldn’t give a shit if I ever experience a threesome. I don’t have anything too crazy going on in my closet, can’t tell you about any really freaky encounters or swinging parties. I don’t have really odd kinks, I don’t need to push any boundaries. I don’t need more/crazier/harder to get off than I used to.
I like a little bondage, a little kink, trying creative positions, and have a little thing about sex in interesting places if time/lack-of-visibility allow. That’s about it.
I’m not off-the-charts with my sexuality, and I’m not even promiscuous. I’m old-fashioned.
But I think into every sex life a little doggy-style must fall. Or maybe a lot. It’s open for debate — let’s bang-out a plan of attack. What can I tell ya?
I think sexuality is probably one of the biggest journeys we all take.
How many people ever truly get comfortable in that context? How many people not only get comfortable with being truly sexual, but do so in a healthy way — they don’t overconsume porn, hurt others in their quest for fulfilling needs, or develop unhealthy dependencies on any particular activity, person, or lifestyling?
The world doesn’t have enough oft-laid happy “average” people skipping through life with a “I”ve been shagged SILLY” bounce to their step. How many accountants do you see walking bow-legged on Monday morning, huh?
The attitudes we DO have about sex, unfortunately, are being shaped by really fucked-up messages on the media, in Hollywood, and the internet. Sleeping around’s more popular than it’s been since the ’70s,  STDs are on the rise, people are experimenting left, right and centre because media’s showing all these alternative approaches to us…
But where’s the heart?
Where’s the emotion?
Why’s there such a profound disconnect between what we’ll let ourselves feel in the crotch versus what we’ll allow our hearts to feel?
What the hell are we thinking?
Sigh. Don’t ask me, man. I’m only beginning to even attempt to crack that nut.
For the last 2-3 years, I’ve not been considering sexuality and society as much as I once did. Re-reading my work has reminded me of why I’d been so angry about it all in the past, and has rekindled my interest in being one of the voices to bring some reason to the argument.
I think so much of what’s wrong with us as a society can be explained through our skewed perspectives on sex.
I’m not suggesting getting laid equals world peace.
I’m suggesting that it’s the attitudes we associate with sex that matter, not necessarily about whether we’re getting laid or not.
When we do get shagged, how vulnerable do we truly let ourselves be? How willing are we to let our loved ones into our deeper darker places we’re scared to admit exist? How ready are we to open the doors to where we keep our skeletons?
Sex is the physical realm of mental trust. What you’re willing to do mentally SHOULD translate sexually, vice versa.
Yet how often is that true?
Are you open to others, do you accept all ways of life, can you trust those around you, are you comfortable expressing your needs? Tell me what kind of lover you are, and I’ll tell you the answer to those questions. Again, vice versa.
If everyone was open, trusting of others, accepting of other lifestyles and worldviews, willing to be versatile, able to be vulnerable but also strong when needed, and could let others lead when necessary but follow when called for, what kind of world do you think we’d live in?
Don’t tell me sex can’t heal us.
Don’t tell me sex isn’t an important statement on who and what we are as a people.
And don’t even think of telling me we’re okay.
I’m not crazy about standing up here and being the sex-positive poster-girl. I’m not enthused about the judgment or speculation it promises to hold for me. I’m not happy this job needs doing by anyone.
But there’s no one out there talking about sex for ME.
There’s no one *I* get. No one echoes the battles I’ve fought, the lessons I’ve learned, and the thoughts I’ve had in a way that really resonates.
And I know how alone I felt and how fucked up and self-judgey I was, and for how long.
Someone needs to speak for me.
So I will.
And hopefully it’ll mean a few other people feel spoken for.
Because I’m getting real fuckin’ tired of the people who’ve been doing all the talking so far.

While all the good little people were out getting in touch with their god of choice, I was having a lovely Sunday morning watching a BDSM fairytale, Secretary.
I’ve been meaning to see Secretary since its release in 2002, as I’ve been a lifelong fan of James Spader ever since I loved hating him in Pretty in Pink when I was just 13.
I remember being apprehensive about the movie, though, way back in 2002. BDSM, I thought, was largely for Weirdos. I suspect the movie was the first really mainstream movie to introduce the lifestyle to a large percentage of the population who probably walked out of the theatre with a silly grin pasted on their lips. It’s not so bad, they likely thought. A little odd, and weird, but certainly not this horridly perverse thing their churches had them believing it was.
Since then, my eyes have opened. No, I’m not into S&M, though I don’t mind a little smack on my ass from time to time, but I’ll probably never join the movement. I ain’t, however, writing that in stone.
The movie Secretary does not dispel the notion that those who gravitate to this pain-for-pleasure lifestyle tend to be somewhat broken inside. It echoes the common perception that the participants are hurting after a life of shortcomings and trouble, and this is their way of finding a coping mechanism. Control the pain that pains you, and you will control the life around you; this seems to be the prevailing wisdom.
So there are those who scoff at them and scorn them, as if they should find healthier mechanisms for dealing.
Aren’t we all hurting to a degree, though? Don’t we all nurse regrets and fears and wishes and wants? Sure we do. But the rest of us got the magic “All Better Now” button installed when we were manufactured. Or did we? Hmm, perhaps we could use a little coping, too.
And what would you suggest? How about a more socially accepted method? Alcohol to cure to ills? Cocaine’s making a comeback, you know. Perhaps cardio-holism is more your thing. Sweat, then, baby. How about a double-banana split? A bag of Doritos? How about shoplifting a new shade of red lipstick? Say, I hear they have a double-bill at church this weekend.
The point is, we all confront our demons in ways particular to us. The notion of willingly allowing ourselves to be hurt seems to be one that most people can’t handle. It’s not as if life doesn’t bruise us often enough as it is, is what people think.
And, sure, there are some right-fucked sadomasochists out there, but there are also some incredibly well-balanced ones as well. It takes all kinds, just like bowling. The thing is, do you understand why you like to have pain inflicted on you? Are you aware of what it does for you? By that same token, are you aware of why you want sex and romance to be all feathers and soft kisses?
It’s all about self-knowledge, this life thing. The more you know about what motivates you to do what you do, the greater your grasp on things will be. If you’re oblivious, then you’re in trouble. Simple.
I’d argue that the person who likes only the soft love – the gentlest of kisses, the lightest of touches – is equally as mentally ill-equipped as the out-of-touch person who prefers only pain. I’d say that they probably fail to realize just how sheltered they’re trying to be from the harshness of reality, and that they need to wake up and smell the rough sex.
I think anyone who’s only into pain for pleasure, and has no other outlets, is unbalanced. Just like in Secretary, there are plenty who like a little roughness and pain in between the soft kisses and lingering caresses. Balance is good. Experimentation is good. Sticking to vanilla all your life, or just Rocky Road, is probably never a healthy way to go.
There is nothing wrong with loving a little roughness. There’s nothing to be ashamed of when it comes to enjoying your lover smacking your ass so hard it’s red when they’re done. There’s simply nothing wrong with liking anything, as long as you understand why you like it, and you’re not just using it to cover up the ills of your existence.
Society doesn’t understand BDSM, and they’re not going to anytime soon, either. Acceptance is increasing, but as long as it’s all the hardcore folk riding front and centre and playing the roles of spokespeople, there will always be a negative perception about the lifestyle.
It is what it is. Enjoy what you do, and know that being discreet doesn’t mean being ashamed; it’s simply self-preservation in a society that just doesn’t understand. Sounds like being gay in the ’40s, don’t it? Oh, well.

Hi, there. I’m Steff, and I’ll be your pilot.
I seem to be getting new readers every day, and I wonder what their reactions are when they get here. I’d like to say a little about myself and what my little mission is. So. Without ado.
Who am I? Well, I ain’t your standard-issue sex writer. I’m cute, but I’m more comfortable in jeans and a funky shirt than anything else. I ride a scooter. I listen to indie rock and know what the inside of a mosh pit looks like. I work with kids sometimes. I’m smart, I’m independent, I live alone, and I’d rather be single than in a less-than-filling relationship. I went to Catholic school as a kid, was elected to the student body in college, always had good grades, used to volunteer a lot, always have done well professionally, can work a room and schmooze with the best of ‘em, have never worked in a sex trade, haven’t had a lot of partners due to old-school ethics… Et cetera. 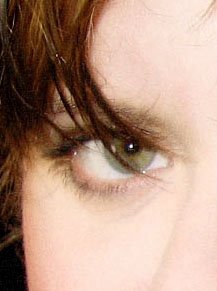