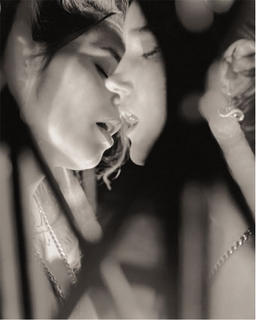 wistful jazz wails in the background. the drive bustles with beatniks and bohemians, baddies and babes. stale cigarette smoke wafts towards me. i see the source. you.
i only glance at you for the briefest second, but you catch my eye. that smoldering look you got’s really something else, i think, returning to my book. while i reread the same passage, i sense you watching me. this time, looking up, i slowly take you in.
you’ve got crumpled olive green cargo pants on, but they’re just tight enough around your round bubble ass. you’re wearing two tanktops, layered, one white and one black, and a leather jacket’s slung over your forearm, obscuring some of your tattoos. surprised at myself, i openly admire your breasts as i continue up you and meet your glance.
“glance” is too light a word for that look of yours. your eyes are locked on me like a fighter plane acquiring a target. so brazen, so bold. so intimidating.
i find myself wishing i had that in me, but today i don’t. i smile weakly, then break the gaze, dropping down to my book, back to my safety zone.
out of the corner of my eye, i see you shoot me a final glance as you join up with your approaching friend. sad to see you leave, i at least watch you go.
now, days later, i revel in my regret for the courage that came too late, and for the chance squandered so quickly. the more i write this blog, the more i think of girl love.
it’s not that i’m attracted to women, because on the larger scale, i’m not. but there are those few people who transcend gender and sexuality. those people with such effusive senses of self that it’s nigh impossible to not get turned on watching them.
every now and then, there’s a chick with the right hair, the right clothes, the right demeanour, and some kinda sexy goin’ on, all combined to a T.
my god, my interest flares. it’s kind of like the perfect alignment of the sexual cosmos. but it would take a lotta woman to get my lovin’.
that said, if i were lured to the pussy side, it’d have to be because of the softness and the contours of a woman’s body. i wouldn’t go for skinny chicks, i don’t think. a little curve would be necessary, but how much curve wouldn’t really matter. anything but the grand flats, if you know what i’m saying.
as a photographer, i know i would be aroused by having a really hot chick naked on my bed. i can’t help it. physicality in front of me just gets me riled. i’d have to seize the opportunity to shoot her, and in so doing, my intrigue would escalate. i’d need to touch, to explore.
i mean, having her just lie there, naked, natural, and at my beck and call? my god. i’m not strong enough to resist that.
__________
the closest i’ve probably ever come to taking a chick up on the offer was back in the day when i had long hair, up in the yukon.
now, you need to know that my hair is probably among the thickest i’ve ever seen. even thinned out, it tends to be 3-4″ thick when long.
these days, riding a bike and needing to wear a nasty motorcycle helmet daily, i keep it extremely short and punky.
but back then, my hair would get me the most amazing reactions from total strangers. the nicest compliment i’ve ever received, to this day, came from a passer-by on the street.
that day, a man was about 30 or so feet away, walking past to a store, when he caught my eye on a sidewalk cafe, double-took, and crossed over to me.
“excuse me. look, i’m not coming on to you. i’m married, but i just needed to tell you that you have the most beautiful hair i’ve ever seen, and i hope you never cut it. that’s all i wanted to say.” he smiled. “have a great day.”
and he spun around, just like that. never saw him again.
the next most memorable “hair moment,” for me, was in the yukon, in legendary dawson city, when i encountered yukon girl.
i was camping with some friends for a couple nights at a site with no facilities, so i was just cleaning up in a public washroom up there when this chick comes out of a stall. i was smoothing some product in my hair and she saw my face in the mirror. she stepped into my reflection, and said to me, “are you a leo?”
and i laughed, “no.”
so she said, “with that lion’s mane of hair, honey, you oughtta be.”
she growled playfully, and i couldn’t help but grin. i turned to face her. she then proceeded to tell me her campsite number and that she was probably staying behind in her tent that night as her friends were going to the music fest.
she stepped closer, her tits nearly touching mine. “maybe you want to come play.”
i was younger and a little shocked. i’d had chicks come onto me occasionally, but never this brazenly, and never this hot.
today, i’d have gone and played. she was my height, about 5’7, and hot long auburn dreadlocks, but the really nice kind. basically, she was a hot, hot hippy chick.
now, i don’t usually dig hippies ‘cos hygeine’s so big for me, and some of them just take it too fucking far. she, however, had taken it nowhere near far. in fact she never left “fine.”
i was very hot for her, to tell the truth. i was just scared — scared of the experience, scared of my sexuality, scared of what it might mean.
but not anymore. i’ve had few regrets in my life, but passing on that opportunity would be one. i can’t help but imagine sinking my teeth into a piece of that.
are you out there, yukon girl? honey, if opportunity’s knocking, i’m answering.