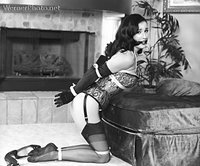 Despite the onslaught of winter here in Vancouver, I took a nice long bike ride by the river yesterday, capitalizing on the selfdom-seen sunshine while I could. On my way back through the industrial lands along the river, a large delivery truck passed me by. Its paintjob dominated by dirt, I saw a message scrawled into the caked-on dirt on the back door:
“Wish my girl was this dirty.”
I had a great laugh as I continued peddling my way home, but it left me thinking about the dualities that every lover should have, but that many don’t. In writing about something similar not too long ago, I said, “When it comes to the bedroom, I’m able to balance being sensual, doting, and romantic with being pretty wicked and dominant when I feel like it. Sex is supposed to embrace all aspects of our personalities, and it’s the one time in our lives when we really have the chance be the person from our fantasies.”
If I can get personal for a moment, I suspect I can break down the evolution of a lover as it should happen for most people, and did happen for me.
As a kid, I was raised Catholic. My parents felt the religion was important, but as with anything in my life, when I believe something, I believe it with a zealous passion. By the time I was seven or eight, I was taking the priest’s sermon and teaching it to the athiest kids in the neighbourhood. At about nine years old, I was seriously thinking I should be a nun when I grew up. Seriously.
Like I said, passionate. In my mid-teens, a few things happened that made me realize that I might believe in the principles of the church, but that the folks who ran it were pissing me off. It didn’t take me long to walk away from it, and within a couple years I began learning about other faiths and realized we’re all in this together. I lost my dogma, and just kept the ethics.
As a result, though, I grew up with a lot of really religious takes on sex. For me, it was a sin. I never had sex until I was 18, and I felt wrong about it for the first two years. It wasn’t fulfilling, not really, despite my enjoying it, because I felt like I was going to be judged by a higher power or something. Around 20, I met a guy who introduced me to bondage, and I lost a few hang-ups then, but I really never got past myself until my mid-20s.
In my late 20s, I took an extended break from sex while I Dealt With Shit, but slowly began to realize I’d been cheating myself and depriving myself. I realized that I’m by nature a very mischevious person, and a person who needs that intimacy in order to feel whole. Why did that never translate to the bedroom, I wondered? Why was I so repressed and such a good-girl lover when I knew I could sometimes be oh-so-very-bad? I decided to force myself to try out the role of the “bad girl” and see what it did for me.
What it did, was get me off. What it also did, was get my lover sizzling hot. That look in his eyes told me he wanted to devour me whole, then and there. I’d never seen such unbridled passion, though I’d always had a fulfilling sex life. What next, though, I wondered? Would he treat me different? Were we going to have a weird situation after this? I realized that depended on me. Would I act normal when it was all said and done, return to the fun, irreverent Steff I knew myself to be? I had to, I decided. I had to see if I could be both.
I did, and I was. I realized then that the lover I was behind closed doors wasn’t the only person I was at heart. I was both. I was, as they say, every woman. Every woman I wanted to be, I could be. I could be bad in order to be good to my lover, and not have that impact who I was on an ethical level.
This is a dilemma I think a lot of people need to come to terms with — that playing games and being bad in the bedroom doesn’t necessarily reflect who you really are. Living out your fantasy version of you is something that can co-exist with your reality. The trouble is simply getting past whatever moral code it is that we’ve had imprinted on us by a society that doesn’t really get the fact that duplicity isn’t always a bad thing.
Have you managed to get past your hang-ups? How did you do it? If you haven’t, are you trying to? Let’s hear it, folks.