Four years ago I wrote a posting about cheating and in it I had a little rant about being called an “older woman” by the letter-writer when I was only 32. The posting is here, and today I deleted a comment that referred to the rant-within-the-posting with this comment that I’ve chosen to delete for its stupidity:
“The sound of a cougars claws slipping down the slope called age.”
That was the comment in its entirety, aside from quoting the entire paragraph under the blockquote-box’s question.
It pissed me off. Why?
I’m the anti-cougar. END_OF_DOCUMENT_TOKEN_TO_BE_REPLACED 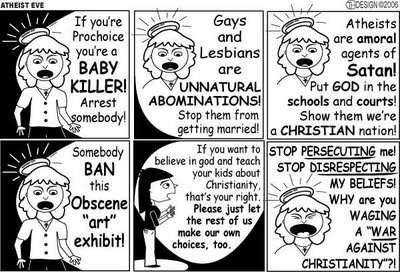 It’s a Sunday afternoon, and instead of being on my ass at home or out in the world, I’m at the office. Not “the” office, really, since I’m just helping stop the Christmas bleeding for the goodly folk who owned my ass for five years, but still, here I am.
Last night was the annual Christmas party for their staff, which entails copious alcohol and fabulous food. Last night? Oysters, lobster. Precisely what to give an undersexed sex writer: An aphrodisiac. I so thank you for the added frustrations.
Add to that, I spent the night with a gay man. My best friend, GayBoy, and I crashed at his loverman’s pad after too much drinking.
I laid there on the Ikea couch, staring at the citylight pouring through the horizontal blinds, the lines of light playing on the cieling, and thought about earlier in the night…
My recent endeavours writing about smut has become a popular conversational topic among people I’m catching up with, and last night was no different. Sex became the evening’s topic, and naturally, when I was out on the sidewalk with some of the boys, talking, they proceeded to let me know about the men’s washroom in the oyster bar.
“The Centipede” became the most-talked-about piece of art — a black & white abstract close-up of a woman’s vagina. It turns out there were more than a half-dozen or so close-ups of vaginas in all their assorted beauty (eye/beholder) adorning the men’s washroom’s walls.
And in the ladies’ room? Pictures of squid. Oysters. Other seafood.
So, this begs the question: Where is our equality, huh?
Not that I’m saying I really needed any additional sexual frustration last night, but I’m a little baffled how a supposedly upscale place in one of the posher neighbourhoods in downtown Vancouver gets away with seafood in one washroom, and nicely done porn in the other?
It’s an interesting statement about men, particularly the autographed, framed photo of a porn star / stripper named Portia, inscribed, presumably, to the owner of the establishment. It read, “Shaz — I’m sorry to hear about your upcoming wedding. I was so looking forwards to riding your hard cock.”
Naturally, the boys insisted they play guard and keep the coast clear long enough for me to go and soak in the ambiance of the boys’ room. It was great for a laugh, and goes to show how divided the sexes are still. To each their own.
The guys I was with, one gay, one whipped, and one probably bi- (any guy who can belt out an Ethel Merman impression about a credit card has no goddamned right claiming to be heterosexual), all claimed they found the “art” a little disconcerting.
Either way, I could care less. I don’t think there’s anything wrong with it. Yeah, maybe it objectifies women, but you show me one fucking thing that doesn’t, honey, and you got better eyes than me. Fodder for dialogue, that’s all.
Now, I see nothing really wrong here, but what do you all think about it? Does it make an interesting statement about the sexes today?