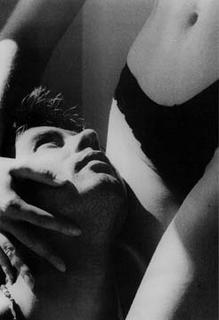 Okay, so supposedly you’re all here ‘cos this girl knows her shit, right?
I gotta tell you, though, I’m stumped. Seems a reader who simply goes by “Regular” wants to know how a man can then get his woman all riled in response to the posting below this one, A Few Ways To Get Your Man Rock Hard.
Would that it were so easy, my friend, but we all know women are complicated. Them’s the facts. Anyone who tells you different is full of shit. There’s no Magic 8-Ball easy-peasy decoder ring to turning women on. We’re a chore.
Women talking about how hard it is to understand men sometimes strikes me as laughable. The truth is, we got it easy. Your buttons are so goddamned easy to push. Whether it be stuffing your suit pocket with our panties after a ritzy meal out, or dropping our clothes in front of you, it seems like that’s all it ever takes.

Excepting the occasional so-called “dysfunction” episode, of course. I hate that word because it implies that guys should have a money shot every time a thought about sex occurs to them. What kind of fucked-up expectations are we encouraging here? Can’t they just be aroused on a different level for a change? Not if you listen to the goodly folk like Pfizer pushing a Viagra-sized solution on the masses. “A man needs a manly response,” seems to be the spin of the decade. Seems we missed the memo explaining intimacy sized up to a lot more than just seven inches rigid, or whether a chick comes.

Chicks, though, our hot buttons come from a world full of different places. For us, it’s not as visual as it is for men. It’s something almost intangible. A expression, a phrase uttered, that way you’re sitting all cross-legged and peering at us like you can see right through us as we regale you about our childhood, or any other number of absurdly impalpable means of getting stimulated. Or at least it’s that way for those of us in touch with our sex drives. We all know there’re some pretty fucking androgynous folks out there.
I’m turned on by everything from the way a guy sits with a guitar to how he focuses in on me in conversation. He can make me insane by delivering a hard kiss against the wall, or by lightly tracing a finger up my jeans as he approaches from behind, or by tugging me down to the ground for a hard massage that soon goes awry. I’m so fucking turned on by earnestness and honesty in a guy that I wish it could be bottled. Often, it ain’t nothing he does… it’s how he is that’ll draw me in.
I don’t know what the margin is for chicks who initiate sex, but I’m pretty fucking sure I’m somewhere near the head of the class. I like sex, and in a relationship, I’m not afraid to express the want to have it — in any number of ways and often, very often. This means I’m pretty in touch with my sex drive, and as such, I probably get turned on by more with a man than your average chick might. Maybe. I’m speculating.
I really want to hear from the chicks on this one. What do the boys do that really get you hot? How can they best press your buttons?
For me, it’s a guy that strokes my legs or ass in a really nice, intimate, gentle manner, just as we’re watching television or something. Over and over and over again. The longer he does it, the more I move towards Meltdown Mode. It’s a guy who shows absolute interest in me. Who leans towards me whenever I begin to speak, who hangs off my words, who drinks me in. If I get that, I’m absolutely fascinated. It’s about intensity and intimacy, and it’s no one thing a man does that makes me want to jump him. It builds, escalates, then implodes on me, and I attack.
In general, guys have all the tried-n-true methods at their disposal: massages, surprise candlelit dinners, a good pair of jeans that advertise your goods, a blanket and a bottle of wine on the floor before a fire, love notes hidden in her purse, biting her neck, and so on. As for specific make-her-want-me-now moves, I can’t really help you. I’m an odd duck.
So now let’s hear about it from readers. Well, girls? In what ways can a guy best delicately manipulate his fuckability factor with you? Hmm?
And guys, you could add a little more to the posting below, so we know what else we can do to/for you. Before you begin to feel transparent and all, just think, what’s the worst that could happen? You’ll give more chicks more means for knowing how to spell out “Fuck-me-now,-please” for your benefit. So, a little cooperation? Thanks.