Ah, me hearties, here I sit, the night wind whipping through me bedroom, as I scheme and plot. How difficult, really, would it be to sneak on over across the way and steal me that surely-leaky rowboat, strap it to my scooter, head down to the mouth of the Fraser, and set sail? How many hours – three, four, a thousand, more? – would it take to finally reach the Caribbean, where I’m sure to not only find Captain Jack Sparrow, but seduce him?
A piece of cake, I’m sure. As good as done, she says.
Okay, all right, so no such lofty plans exist. Ya found me on out. I’m just a big liar/dreamer/whatever kinda gal.
Instead, I sit here in my jammies, my fleece sweater zipped to its very top, my toes curling in the chill of this unseasonal wind, thinking simply that Johnny Depp fucking rocks.
It’s funny, we all have our definition of sexy. Me, it tends to be guys with a little extra around the middle and broad shoulders and baby-ish faces. Can’t tell you how often I fall for that look. It’s just the flavour that suits my tastebuds the best.
And everything in that description is what Johnny Depp isn’t. He’s short, skinny, has a chiselled face, and so forth. But he’s so fucking cool.

Depp’s gotten where he is with little compromise. If there’s anything sexier than someone who makes it on their own steam, their way, with zero compromises, I wish to hell someone would show me. For me, that’s as hot as it gets.
I try to never compromise, but the realities of my life dictate it happens more than I’d like.
Johnny Depp, though, has never, ever compromised, as far as I’ve been able to tell.
I remember my first dose of Depp. It was grade eight and classmate Joyce called me to tell me about the dreamiest new guy on this Vancouver-shot series, 21 Jump Street. She and I differed on the heady topic of men, though. I was more into George Michael and Corey Hart, and she liked the lead guy from A-ha and other skinny people like that. I grumbled and muttered, “Oh, I’m sure he’s hot,” but secretly thought he’d be another scrawny sour-puss type guy.
Well, I was so wrong. I sort of liked him. He gradually grew on me, even though I was more into Peter DeLuise for a while there. But then there was the fraternity of geeks episode, where Depp had to play a pocket-protector type nerd. He just came alive. He was so comfortable playing an absolute outcast that I couldn’t help but love him. 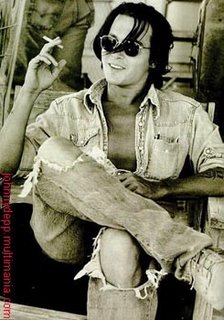 And since then, Depp’s become the iconoclastic outcast. No one but no one identifies with the outside as much as Depp, and even as a millionaire, you still believe that about him. There’s just this air of outsider integrity that he’s never been able to shake. And unlike all the other so-called “bad boys” in the world, he’s absolutely as polite and gracious as can be.
Depp is the new man. A rebel and a sweetie and an artist and an intellect and a politician, all rolled up into one sexy little package. Men who wonder how to show their sensitivity and how much is too much should look at Depp. The guy’s in interviews admitting that he plays Barbie for 12 hours with his daughter and, “It rocks.”
The guy’s in touch with that side of himself. Being vulnerable isn’t the end of the world, men. Letting us know you’re a little broken and a little bent means we can appreciate more of you. Don’t worry, you’re not failing us when you’re not Big Strong MegaMan. You’re just a guy who’s being dug by a girl, and who’s toppled a wall of his to let us in a little.
Hell, Johnny Depp’s getting $37 million for being unabashedly himself. He’s dressing up with necklaces and eyeliner and being called the sexiest man in the world. Do the fucking math.
The “man’s” man isn’t what it used to be. Depp’s the not-so-metro-sexual who’s redefining what makes a man in the 21st century. Tell you one thing, a man of his ilk hasn’t been seen ‘round these parts in many a decade. Hollywood ain’t been makin’ ‘em like Depp. Not ever. Dude’s in that rare air reserved for stars who steal the screen – Jimmy Stewart, Bogey, and Cagney – who can pull off thick, theatrical eyeliner. Oh, that narrows it down to Erroll Flynn, then, doesn’t it? Bogey in black-lined eyes… hmm, no.
Whatever. That rowboat across the way is not long for this world, baby. Get me some rum, some sunblock, and I’m on the seven seas, baby. Arr, matey. Anchors aweigh!