I wonder how many of you have ever read a book about sex. Not something erotic, but an instructional how-to type book on gettin’ heavy. Me, I’ve delved into a few over time. Right now, I’m jumping through different chapters of Paul Johannides’ classic sex tome, “The Guide to Getting it On.” Whatever question you have about sex, it has likely been answered by Paul.
This chick gives it five stars. It’s one of the best out there. Here’s a quote Paul cites from Clean Sheets, the online erotica magazine:
“Why is it that some men just can’t deal with the idea that a smart, together, professional woman like me can actually deserve their respect and still want to be thrown down on the couch and pounded like a cheap steak now and then?”
Heh. Well, that’s a very good question, honey. We all like a little steak now and then. Mm. I think guys are more hip to the duality of today’s woman than they’ve ever been, but maybe I’m an optimist.
Can the guys out there comment on whether knowing a chick likes it a little rough and dirty compromises how you perceive her in the “real” world? Chicks, can you comment on whether you feel this is less the case now than before, or whether you’ve noticed a change in perception of you after your sexual preferences have escaped? 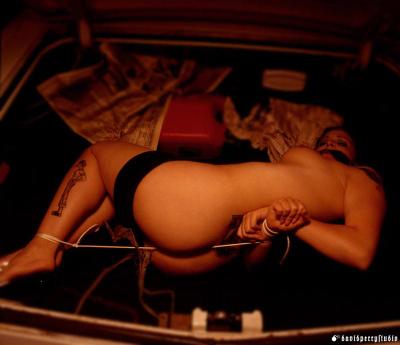 (the photo isn’t from The Guide. the images in there are all cartoons, this was found on the web by moi, taken by photog David Perry. I think it’s kinda hot, but it may bother some of you. Feel free to comment.)