An immensely wise philospher-singer once sang:

Whatever happened to that Paula Abdul, anyhow? Where is she now? Those one-hit wonders, you know, like flashes in the pan. 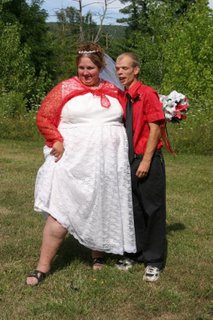 The Guy sent these photos the other night after I pointed out what had to be, and what I said then, the most unseemly gay male couple I’ve ever seen. Now, keep in mind, I live in Vancouver, or as I think of it, San Francisco North. I’ve lived here all my life and see trannies, queens, and the whole shebang as often as they come.
Picture a Pillsbury Dough-kinda boy: nice protruding round belly, about 5’11, goatee, 26, kinda cute in that “If I weighed 65 lbs less, I could be a surfer! Hand me a Twinkie?” kinda way. And his boyfriend: About 5’5, absolutely skinny, 18-if-a-day, wide-eyed with do-it-to-me-now! lust, gazing up longingly. Chunky Two-Time had LoverBOY leaned up against a rather dubious chain-link fence, and it was pretty fucking obvious who was offering a little topping for the evening, if you know what I’m saying.
The Guy shuddered. And rightfully so. It just looked fucking weird, man. I’ve seen the whole Blue Oyster Cult-Village People leather crowd, the big fucking hairy bears, the demure little Asians and their Rice Queens, and the whole shebang, all right? This looked weird. I’m tellin’ ya.
But not as weird as this.
I went out with a guy once who argued that, when it comes to love, a couples’ longevity depended categorically on the balancing of the attractiveness scales. There had to be a relativity between their appearances, or it’d be doomed due to the rearing of the ugly insecurity head.
Maybe. Maybe so. Maybe not. I don’t have my Relationships Physics & Probability degree just yet. Probably a hold-up at the post office. Please, Mr. Postman, look and see if you got a letter in your bag for me. I been waiting such a long time since I ordered that degree of mine.

I think there could be some truth to it. Look at the couple in the photo, then. As I said, the Guy fired it off to me to illustrate that the Gay Odd Couple was a fitting reminder of this forwarded email he’d received that’s making the rounds as “Redneck Wedding of the Year.”
(I didn’t realize they had a rewards ceremony now. What, every-fucking-body’s got trophies now? Who’s next, huh? Bowlers?)
I confess, I feel badly putting the photo up. I’m sure they’re sweet people. Scary, but sweet. In between shooting beer cans off the fence, Jeff Foxworthy reruns, and playing D&D, they probably serve up a hell of an apple cobbler, you know?
I just don’t get the whole opposites-attracting thing, myself. I’ve always been attracted to guys who carry a few extra pounds, just like me. (Not rotund, just excessively huggable.) They should be bookish, and into film and food and life, not clubs, and smart enough to make me frustrated that I shoulda known that first.
Most couples I know are pretty on-page physically. Not too many of them would stand out in a crowd, and probably most seem natural together. The beautiful people get together, the people with perfect hair curl up together, the punks mesh’n’mosh, the granolas sing Kumbaya in harmony, the plastics meld… it’s all so consistent. Do they last? I don’t know, but they look right at the mall.
Nah, I don’t get opposites attracting. What’s the point of hooking up with someone you got fuck-all in common with? How about you? Has it ever worked for you? Are you into the relationship equivalent of magnetic field reversals or something? ‘Sup with that? Enquiring minds, yada, yada. And were you at this wedding? What kind of cake was it?