A word of advice?

If you’re a woman, and you’re unable to orgasm,
and you have photos of your family
anywhere near
a place you regularly like to have sex?

Why? Because psychology is important in sex, and so is shame. If you feel shame, you won’t orgasm. If your mommy or daddy or little nephew Joey have eyes on you with your legs spread and a guy controlling you?
Yeah, good luck with finding your happy spot.

DirtyTalkingGirl (DTG) over at Pussy Talk recently posted this about her lover’s stubborness in wanting to get her off through oral:

I have to say that M gave me his best last night. He went down on me unasked, made all the right moves with tongue and lips, pulled my thighs over his shoulders, changed position and bent in over me from the side, tried every angle of oral approach and entry. He was textbook-perfect.
All to no avail. I couldn’t come.
At one point, I apologised. Told him it wasn’t him, I just wasn’t in the mood, time of month, blah blah. I added, I’d rather you fuck me. I wanted the penetration.
He said, “No, I want to make you come this way.”
As he laboured on, putting fingers here and thumb there and vice versa, I felt like a lawnmower that wouldn’t start.

This posting set me off, for some reason. I began thinking, “If someone as skilled in and open about sex as DTG felt this frustrated and this much like a failure when her lover plodded through what he thought was his money routine, then where would that leave a “lesser” lover?” 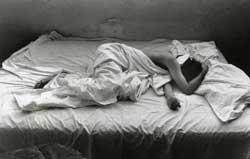 Feeling pretty fucking negative about sex, I suspect. And that’s not fair. In fact, it’s downright cruel.
Our bodies are enigmas. Some things work brilliantly sometimes, and sometimes they fail. That’s just the way it goes.
DTG went on to say that maybe a switch hadn’t flicked in her mind, that the mood hadn’t hit her, and as a result, she was left unswayed by his “best.” She asked to be fucked doggy style, and was again rebuffed. Her lover stuck with his seflish intent of having her reach orgasm his way instead of the one way she thought she’d be able to reach it, considering her somewhat uninspired state.
I’m here to tell you one thing and one thing only: I don’t give a shit if you’re the king or queen of the world with your skills. If your lover tells you it ain’t working, that they want to have you try X method, and you rebuff them because you’re somehow intent on bringing them to climax through your present approach, then it doesn’t matter what skills you have.
You’re a lousy fucking lover.
Listen. Listen. Listen. I’m always saying “listen for aural clues — a switch in breathing, a moan,” whatever it takes, right?
Well, when someone flat-out tells you what they want, and they tell you they’re having trouble “getting there,” and you disregard it, you’ve broken every damned rule in the book.
Me, I think that when the mental baggage started to come into the picture, DTG should have told him to stop. I think she should’ve made him realize that he was starting to make her feel bad.
But that’s just how it goes. It’s so overwhelming when we’re in the heat of that moment and all those inner bells and whistles start tooting: “You can’t come? What are you, frigid? You’re good at this. Hell, you don’t even need to do anything. The ride has come to you! Come on! Orgasm! Squirt, baby!”
We can logically dismiss it, but the hurt’s still going to find its way in, and we start thinking we’re being selfish AND a failure.
And the truth is, it’s not us being selfish, nor failures. It’s our lousy fucking lovers.
This applies to both sexes. Listen to your lovers, and don’t let your pride and inability to concede defeat leave them feeling like crap (and unsatisfied).
It’s wrong and it’s cruel. And it’s just plain bad sex. Wake the hell up.