This is the kind of posting I would instinctively run carte-blanche on The Ditch, but I thought I’d say hi. Hi!
I’m having a horribly pseudo-Monday Tuesday that just keeps packing punch after punch. Waking up was all wrong. I woke up, And Something Felt Wrong.
But I, a true trouper, forged ahead. Sure, my jeans were worn a couple times already, but they would do. The laundry could wait. Breakfast, I decided, could not. I made myself ham, some supah-dupah² strong java, toasted me some baguette (bad, but so good!), and made a couple over-easy fried eggs.
One which I dropped immediately on the floor.
The floor I cleaned last night. Thus, egg was partially salvaged, and if you judge me, man, you’re gonna hafta walk a mile in my shoes of the day, I shit you not. You just don’t know, man. You just don’t know.
I got to the office and realized in total fear that I had forgotten to set the VCR (we don’t got no stinking TiVO yet, so keep that yap closed) to record the all-important, life-altering episode of Rockstar due to air this evening. MY GOD, I thought! I’ll have to do without lunch break, and no supper break, and rush over to job 2 ASAP apres job 1, I decided.
And then I worked like a demon. Sort of.
Work was a no-brainer until someone raised up the gates of hell about five hours into my shift, and whazzo, there it went: Hell in a handbasket. Suddenly, fires burned that needed putting out, rivers boiled, and phones rang. It was, I assure you, evil very incarnate. Oooh, evil.
But I coped. I coped and I coped and I coped and I got out of work two minutes late, hopped on the now-rain-soaked scoot and zipped across the downtown core to the plastic ‘hood of Yaletown. I scuttled my little hiney up to the TV monitoring station and threw myself onto the documentary with a vampiric intensity. Then, felled by the evils of a poorly written, badly edited script, I was forced to spend the next 105 minutes editing the mockery of a language called English, written by someone who’d clearly been a jester earlier in this life or last’s.
I rushed out, three hours to the minute, in the hopes of getting home just in time for Rockstar. And I did. It was 7:53. Then I learned it was on at 9, not 8. Doh. My bad. I still have 32 minutes left now.
A month or so ago, I couldn’t really get any work. WELL, that was then, this is now. My old job wants me, my new job wants me, my ESL students want me. (And presumably you people might even want me.) I can’t say no fast enough! I’m too tired for this shit — why can’t the money folk rear their ugly-ass heads next month, HUH? (And some will. This is something I’m anticipating, and I may make good on it.) 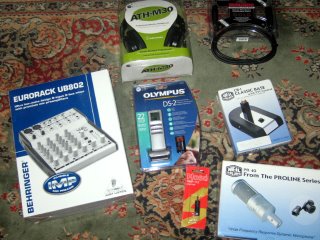 In between all that is this podcasting shit that needs to be taken to another level next week, now that I knows me how to record and all. And a website needs building. Blah, fucking blah! Oh, the chaos of it all! (See gear here.)
But next week will be more sane. I will cut back evening work to just tutoring, about four or so hours, and then I will work one weekend day. Presto, instant fascimile of that elusive thing called sanity.
Of course, I’m medicated, so what the hell do I know about sanity anyhow? Hi, I’m Steff, and this is my Fog.
(Heh.)
No, minions, I’m here to tell you that, despite Their Best Efforts, still I stand. Bitter and needing a stiff drink, but stand I do, and stand I shall. And, one day, I shall spend money I have earned on toys and things that I covet.
(I’m drooling over a 160gig external drive being advertised at Best Buy. Me wants. Me wants! Rowr. But I’m adding it to the list I have that keeps on growing a la Jack-&-the-Beanstalk. Magic!)
Oh, hey, and here’s a couple photos for you. Podcasting gear (shweet!) and the crazy centaur guy I saw at the Luminares festival this year (a celebration of light; which explains why he has a huge, glowing, red penis. I had asked him to pose for me, but he kept wiggling his glowing ember of a penis in my face, so it naturally looks motion-blurred. Yes, that’s one quick dick). 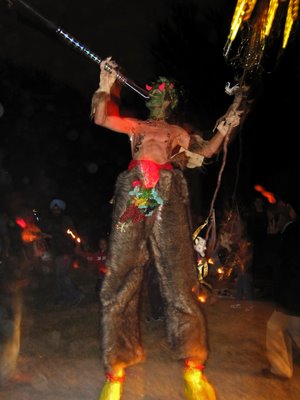