It’s Rockstar night again. Elimination. Starts in a few. I pick Patrice. I think Storm gets a shakeup.
I cannot tell you how much I weirdly relate to this show. I don’t know why. I just want to be in that situation where I get chosen, you know? But this is one of those rare reality shows where the contestants have really earned the right to be there. They’re pretty solid. They’re street-wise and street-smart, though, because they’ve all played the circuit. They’re tough people, man.
Unlike the car-wash kids and farm boys and hoods and all that over on that Idol show.
But, you now, I’m street-wise and street-smart. Girl is hip to shit, you know? For real, like. Sorry, fell into hip-hop mode there for a sec. Y’all.
I’m professionally doomed. Really. Just, kaput. As a writer, I will never, ever, ever, ever succeed. (Okay, so it’s part reverse psychology, but work with me here.) All right, there’s a chance. It’s just slim. Real fuckin’ Jenny Craig slim, you know what I’m saying here?
Why, you ask? Pretty simple. Love the writing, hate the whoring. I mean, all that whoring, and no orgasms? I think not. Whoring, bad! Money, good! Not wasting precious hours of my life giving it to the man? Good! So, yeah, I never write for publications, ‘cos I can’t stand the bullshit, right? Life’s short. Time’s precious.
I’ve tried it a few times. I hate conforming my style. I hate doing rewrites. I’ll do a little, right? I can definitely edit better than this, this is on the fly. It’s just that I’m a little too ADD for the process, is all. I’d love to have a syndicated column, though. That’d be awesome. I just need to one day get my shit together and figure it out. Working on that.
Wouldn’t it be really cool if suddenly there was a Blogstar tournament or something and you could blog your way to fame and fortune? I’d knock back a thousand coffees for that. Shizzwang! 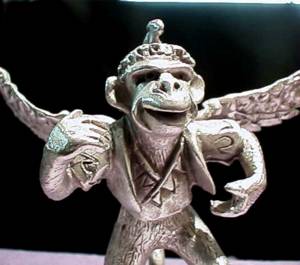 But I do digress. I, uh, hit bottom today, folks. I was a fucking mess until this afternoon. Long goddamned day. I kept breaking into tears. I’ve just had a shitty couple of days – PMS struck like an evil flying monkey from a Wicked Witch. Goddamn it’s vicious! Is it too late to ask for the penis model? Yes? I mean, I’d pay extra some days if I could have a penis.
Stop the presses, though. I think I’m on the up-swing. I think I’m returning to land of the mildly depressed. That’d be fucking SUPERB, man. And I’ve made a counselling appointment. I’m so stubborn. The auto-speller corrects my “UK” spelling of counselling by removing the extra L, and I go back and UK-it again. Fuckin’ Americans and their changing of the rules. C’mon, English (as opposed to “American” English) rocks. It’s Harry Potter’s language, for Christ’s sake!
Back to the important bit, that up-swing thingie-thing. I called it, man. I said I’d probably start to improve in the evening today. Yep. I’ve done the reaching-out thing and my counsellor (+l) gave me a call and we spoke about 20 minutes, and I finally heard someone who knows their shit telling me it sounds like I should’ve been melting down sooner. Nice to hear. Goodie. Instant validation. Just like the thrill of fresh credit, but I don’t hurt for it for years down the line.
Okay, so, Patrice, and Zayra, and Magni have all performed. Judgment looms. Yes, I’ve written this in commercials. I’m realizing how much my body is perpetuating my stress in the form of real bad tension. Thus, I’m pretending to know a thing or two about Pilates type stretching and shit, so I’m not sitting down for the show. It’s helping. My neck and shoulders have been badly knotted. I’d frickin’ harm small children for a massage right now, I shit you not. I should watch a surfing DVD and think about the wonderful movement of the ocean. Yeah. Happy shit, like. But this is good, the mood is improving. I got rid of all my evening work until September (and likely beyond). Some semblance of a life is now possible. As is rest. Things are looking up.
Huh! It’s Zayra who’s gone. I thought that the band’s fondness for her bravado would keep her around a week or two, whereas Patrice consistently is in the bottom three. Wrong call, evidently. Damn that fallibility.
I have succeeded in having fun. Writing this was fun. You see, earlier, I was having one of these tragic god-it-sucks-to-be-single moments and thinking how I had nothing. I was low person on the totem pole again, single, tired all the time, blah, blah, blah! And then, aha!, a thought! I had something. Something indeed. Something just for me. My writing. No, I don’t get paid. No, the world at large doesn’t really get a glimpse of it. No, I’ve never had that moment of seeing someone on the bus reading me. But I get to do it.
And that’s pretty fun sometimes.
(This is my writing equivalent of a game of ping-pong. Highly cut and kinda hard to watch. Heh. Looks cute in shorts, though.)

There was a lover’s quarrel on tonight’s episode of Rockstar: Supernova, and presumably on last night’s episode, as well, which I missed due to catching the fun of Clerks II at the cinema.

Jill is a pretty hot runt, she’s like 4’10 or something, but boy, you get her Italian angst firing and she might as well be six feet tall, man.
She won the rights to sing the Stones’ Brown Sugar with Supernova member Gilby Clarke (formerly of Guns’n’Roses, Heart, MC5, etc.) shredding some guitar. In her infinite wisdom, she thought it wise to, well, hump Gilby from behind while performing.

Gilby, and this fucking rocks, walked away from her antics. He strode towards the catwalk and got the hell outta there.
Then, the post-song comments were exchanged. Gilby said, “The only thing that really bothered me was the humping… Women in music today have sex, like that’s the only thing they can use. You have more than sex. I think it’s cheap, and it’s weak.”
Overnight, Jill commented that, “I think Gilby’s used to having Axl Rose up there, and it’s a totally different dynamic with a woman on the stage.”
She claimed that she did the humping as a means of getting her emotions out in her vocals.
Gilby retorted, “I played with Heart, two women, and Ann Wilson never had to stoop so low as to hump me to get her emotions out.
The next take from Jill was, I think, incredibly lame, but stay tuned for my opinion after the rehash. She said, “It’s rock and roll. Why is there a double standard where a woman can’t be up there and show her sexuality, but you guys can? You rip your shirts off and stuff like that.”
Gilby scoffed. “All the moves were predictable! I’ve seen it at the Holiday Inn, I’ve seen it everywhere!”
Gilby Clarke gets MY vote for feminist of the year, all right? Bang-fucking-ON, Gilby.
Any mainstream chick out there in rock and roll or pop or whatever is using their booty and boobs as much as their voicebox, all right? Don’t give me this “double standard” bullshit. There’s no double standard.
What he’s saying, honeybunches, is that he’s sick and tired of chicks who think they need to fuck their way to success. He wants talent to speak, not a twat. I’m pretty sure he also doesn’t want to be in a band with a guy like Tommy Lee and a chick who thinks grinding one out’s the only way to extricate her emotions.

If you have talent, brains, a body, and the whole fucking package – and she does – then let that speak. Let it wail. Let it send a blood-curdling scream into orbit. Don’t dumb it down or cheapen it by throwing some suburb blonde bubblegum “here, let me hump you now” bullshit into the mix. It’s trying too hard.
Since when was it only a display of sexuality when you reenacted sex? And why did I miss the bloody memo, huh? No one ever tells me dick.
Oh, right, because IT’S NOT the only display of sexuality! Fuck. That’s like suggesting the only way to be heard is to shout.

Dilana, who I’m a secret lesbian for (okay, well, no, but she’s got a fan here, man), can be as on-edge as anyone’s ever been, but she was at her sexiest when she was her subtlest, during her performance of Nivana’s Lithium a few weeks back where she just stood there, fucking STOOD there, staring straight ahead, and raging out the lyrics, her eyes emanating everything they had to, and her body doing nothing. It was so goddamned hot, man, so intense. Yet, subtle, baby.
Ain’t you ever fucked someone with your eyes? Ain’t you ever been fucked by someone’s penetrative gaze? Don’t you remember how goddamned HOT that felt? Yeah, well.
And that’s what Clarke’s saying. Let yourself do your talking – your talent, brains, eyes, pouty lips, the way you wiggle your ass. Don’t think you gotta fuck or hump or grind your way to whatever achievement you’re after, because if you start down that path, there’s not really any other route for you. Respect is a very tenuous thing. Do not be fucking with the respect you have; you may never see it return to you.
It’s really bloody cool to hear a guy get on a soapbox about that sort of thing, and I’m thrilled to see it in an arena like dirty, sexy rock and roll.
Have I mentioned how much I dig this show? Huh? It’s like crack, man. One hit just ain’t enough. 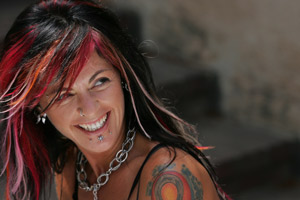 Ah, Dilana, you tasty morsel, you.
Isn’t she hot? Maybe she’s not really your type, but the minute she opens her mouth and talks, she hooks you in. On stage, in CBS’s Rockstar: Supernova, she’s a fuckin’ foxy vixen. She’s practically a female Kurt Cobain. She’s just on. This woman’s something fierce, baby.
What’s cool, though, is that she’s got this undeniable stage presence and this almost violent personality up there. She radiates intensity. Sit her down for a chat, and she becomes this incredibly vulnerable and articulate woman. It’s this wonderful, sexy, powerful female dichotomy I really wish could drive this world more. Be strong, be weak, be everything in between. Just be, baby.
There are few women who get me titillated, but she gets a nod. When you think about wanting to be loved, it’s by people who feel as intensely as this woman appears to. Hot. Fuckin’ hot is what that is.
This is the first time in my life I have wasted a precious second or more to spend time voting in a reality show contest. Sigh. The streak is over, kids.
But it was a free vote, at least. Whew.