In Cronenberg’s A History of Violence, we’re given a great beginner’s demonstration of how to perform low-stress, low-prep role playing games. 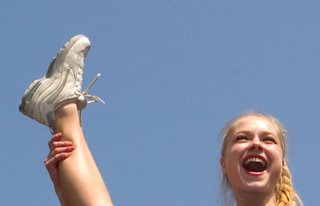 In that scene, Viggo Mortensen’s character is seduced by his wife, who says, “We never got to be teenagers together… I’m going to fix that.”
She abandons him in the bedroom for an uncomfortable length of time as she vanishes into the washroom to prepare for her antics. Finally, she emerges in a high school cheerleading costume and stands there in the doorway, toying with her oh-so-short skirt to reveal a pair of girlie white cotton feminine briefs, complete with a little frilly ribbing.
Just standing there, hiking her skirt up enough to show these oh-so-innocent little panties is enough to drop his jaw.
The fact is, role playing may seem stupid and weird, but why should it? As children, we grow up pretending to be other people and we think it’s fun. “You be the patient and I’ll be the doctor. Open up and say, ahhhhhh. And maybe a little oooooh.”
When does the switch get flipped that tells us pretending to be someone else is bad? Why do we feel so silly? What’s so absurd about remembering to play over the age of 18, hmm?
The thing about sex is that it’s supposed to be that one time — that one time — when we let our guard down enough to be utterly vulnerable. We’re there, naked, in every sense. Splayed and ready for enjoyment. And then, we lose a little control. For the good? For the bad? You decide.
Men and women tend to be pretty different in some regards, outside of the obvious, I mean. For instance, the reliability and comfort factor of a relationship tends to be really important to a woman’s sense of security. Men can get a little nervous about that, and they like to have things shaken up sometimes so they don’t begin to feel trapped. Don’t get all silly and think, “Oh, my man doesn’t feel trapped.” What, YOU never feel trapped? Admit it. You KNOW he does. It’s primal. Who we are. Get over it, but bloody well accept it. Everyone knows what feeling trapped is like.
So, it’s simple — you just change things up. Cook a different meal, wear a different perfume. Wear a wig, even, on a playful night in. Or, adopt a costume. (Change the decor of a room to be more masculine and dark for the night. Anything that adds new elements or airs will make the experience richer for the guy. Just cleaning up and tidying it will make a woman happy, sadly.)
And why shouldn’t variety make it richer? Variety is the spice of life.
One of the things I always loved about sex in the car was that it meant never having to have sex in the same place twice. Nothing quite like a game of strip Monopoly come rent time in the back of a hatchback, you know what I’m saying? One time by a river, another on a lonely stretch of rural dirt road, another in the abandoned car lot on a full moon night. It’s almost worth the handle imprint on the ass, the rug burn, and the crick in the back, you know?
There’s a digression for you. (Hi, I’m Steff, and I’ll be your tourguide tonight.)
What I loved about the role play scene in A History of Violence is how incredibly simple it is. It’s realistic. It’s easy to do. It doesn’t take a whole night of arranging and wooing. It’s reasonably spontaneous on one partner’s part, and is almost like a gift. Or, you can plan to play in advance. Set a date on the calendar… “Saturday, July 29th, 6pm: RP Games.”
Role play ain’t just for dungeons nor dragons, you know.
The advantage in booking the night and time in advance, where you explicitly say “This is what we’ll do” is that you get this wonderful goodness that comes in the form of committing to be together in every way… and the anticipation it brings. Guys LOVE to know they’re getting laid at a certain time. Let them look forwards to it with a little idea of what the night is to bring them, and man, you could find yourself with a pretty eager guy. Don’t you agree, boys?
If you’re a newbie to this shit, there’s nothing to be concerned about. You’re playing dress-up and having a cheap evening in, okay? That’s about the size of it. The pay-out is a little no-holds-barred fun that allows you to forget about who you are for a little while and adopt a fantasy life. It’s not stupid or childish, it’s just fun. Let your pride take a walk, and have a little fun, will ya?
If you’re a vixen-wanna-be, then check out the beginning of the movie (15 minutes in, give or take — I haven’t watched it all yet, so I’m not giving a whole-movie review; just scene approval!). Watch the scene where she seduces him, and pick up cues from that. The “Let’s go, Wildcats!” jump was a little much for me — after all, do you really want to risk jumping on your loverman’s mid-section when you’re about to try to get nailed? And another point, if you’ve taken the time to get a costume and have an idea in mind for playtime, take a moment and clean the kid’s toys off the bed! Jesus Christ! Get them out of sight. That happens at the beginning of this scene, when Viggo’s cleaning the toys off his bed, and that’s not really the cool thing to have happen. You’re about to get shagged — who wants to think of their kids? Again, Jesus!
It’s not rocket science, people. It’s fun. It’s carnal, it’s biblical, it’s illegal in some states, but it’s just downright fun. Why, someone oughta charge some admission.
Photo from filemag.com.