Something’s snapped in me this afternoon. I awoke with a spasm in my neck from having slept wrong after my before-the-crack-of-dawn inhalations of an illicit nature, and my mood has steadily declined since.
I won’t bore you with my shit. Suffice to say my day is a heady stew of money woes, persistent battles with the flu, a turn to shit for the weather, and being overwhelmed by several things that loom ominously before me, like rent. My inability to do a single productive thing today has resulted in a blackening of my previously “just dark” mood, and now the forecast for my evening has me thinking I should’ve started this fucking thing with, “It was a dark and stormy psychic evening when our protagonist…” 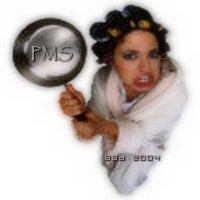 And it clicks. Coupled with my stresses and the full-fucking-moon rising somewhere on the horizon is the dreaded bitch of PMS.
There is a reason, my friends, that PMS has previously been used as a “diminished responsibility” defense for murder: Sometimes, you go right fucking nuts.
And the funny thing is, most of us, we know it’s coming. Every single month you get that day or two where nothing’s going to work. Your mood’s gonna get worse and worse no matter what’s going on, and all you can do is just cope – that is, you would cope, if you actually realized it was just biology fucking with your head again.
Trouble is, it’s usually not until you’re half-way through the ever-increasing darkening that you remember: It’s that fucking time of the month again. It’s your early warning system for the red tide, and the villagers better get the fuck out of the way. 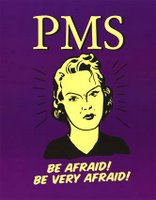 Women despise PMS. Women loathe the emotional charges that come from being victims of estrogen. We wish for days of smoother sailing, when everything would be a little less turbulent. Some days there’s just nothing a gal can do but wait to ride out the storm.
You guys think it sucks? Try riding the wave from inside the barrel sometimes, boys. You ain’t fucking woman enough to deal with half the head games brought on by that fickle bitch named Estrogen.
Personally, when moods like this fell me, I stay out of everyone’s way when I can. I keep the conversations short and sweet, I keep to myself, I keep my mouth shut, and I keep out of trouble.
‘Cos god knows I just don’t have the patience for a court trial, diminished responsibility or no. Just be happy I’ve got cheap, dull kitchen knives tonight is all I’m saying, man.
If I had any Midol kickin’ ‘round tonight, I’d grind those bad boys into powder, let ‘em swim in vodka and cranberry, and I’d call it the Red Tide Rising martini. At least then I could be a bitch in style.