One of my favourite male erotic bloggers is Easily Aroused. I like him for his lyrical prose that often, for me, evokes the intimacy of the encounter. The reason why you go over for one blogger, one author, over another is pretty simple, really. It comes down to style. Some have it, and some wish they did. He does, and I’m feeling quite privileged to have him along for the self-love ride.
With his ode to discovering how good he could make himself feel through exploring his body as a teen, here’s Easily Aroused. (Thanks, EA.) For obvious reasons, the photo is clearly not of a teen.

My love affair with my cock started in earnest after my twelfth birthday. However, my desire for women (a desire that I anticipate prevailing until my final breath slips from between my lips) began to crystallise a little earlier than that. 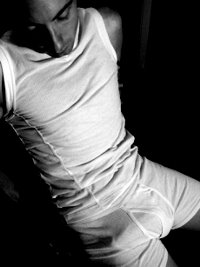 It’s quite possible that its origins lie in the moment that I saw Sean Connery using a dermatome to cut the straps on Anna Dor’s evening dress in ‘You Only Live Twice’. As I watched him ease her zip down the line of her spine, the camera teasingly fading out just before her waiting buttocks were exposed, I was captivated.
I’ve been bewitched ever since.
It was at middle school that I first sought to emulate the brawny Scots spy. From somewhere deep in my genetic makeup came the nascent desire to explore and enjoy women with the same philandering style that Bond did. The problem was: how to do justice to such grandiose designs when you’re only ten years old? Beyond kissing – and by ‘kissing’, I don’t mean something Valentino would have nodded approvingly at – I had little idea what I was meant to be doing with the girls I dallied with; no concept of the true effect they were meant to elicit in me.
In senior school, the real differences between men and women started to become apparent to me. For one thing, girls matured faster when it came to sex. Much faster. It wasn’t long before the fairer sex was turning its collective attention towards older boys. By the time I’d reached my teens, the more sexually assertive girls in my class were dating school leavers, surly youths who sported Don Johnson stubble and driving licences. How the hell could my peers and I possibly compete?
And that was a problem. The girls I stood the best chance with were shy, demure creatures. They didn’t share the adventurous appetites of their more desirous sisters. They wanted to hold hands and giggle, to kiss with tightly pursed lips and their tongues safely out of reach. They swiftly moved your hand away if it got within a foot of their bosoms, slapped it sharply away if it dared stray towards their thighs. The sad truth was that they couldn’t hold a candle to the bad girls. Not at that point. So the mere fact that the bad girls had less than zero interest in me didn’t deter me from being drawn to them like a moth to the scorching dangers of a naked flame.
I don’t recall how it started, but I began writing fantasies about the girls who piqued my interest the most. My scribblings were confined to a hard-bound book which I secreted at the back of my wardrobe. There were no real favourites as such: my lustful attentions tended to flit between the most pronounced objects of my adolescent desire. I don’t remember the scenarios as being especially explicit, either; they were mostly concerned with undressing the girls to their underwear (and beyond) and indulging in some foreplay. Either I lacked the knowledge – or the confidence – to take things further, even when my desires were confined to the literary world.
Yet despite the naivety of my written fumblings (who knew what was to come, eh?), I found myself aroused by the words dancing across the pages, by the images that accompanied them in my mind. They provided my first self-delivered, earnest erections. I’d be lying on my bed, or sometimes the floor, my ears ever alert for sound of feet ascending the staircase, writing feverishly away. Without realising it, I’d be pressing my pelvis into the mattress or the carpet, my cock hard against my belly, trapped, squirming and thrusting as my excitement built.
Inevitably, on a warm summer’s evening, my excitement reached an entirely new stratum. The sensations emanating from my loins went from being ‘good’ to being unbelievably good, utterly consuming in their deliciousness. I began to thrust harder and faster as I wrote, until I reached for the first time what is now an unmistakeable peak. I didn’t realise what had happened right away. I saw the semen squirting from my cockhead and wondered, “Have I broken something?” But how could something that had damaged feel *so* good? And finally, the light bulb flickered on. I’d done it, achieved that mythical goal I’d heard about in the locker room. I’d ejaculated. I’d *come*.
Of course, in doing so, I’d circumvented the more traditional route to masturbatory success. The next step in my private education was to learn how to produce the same effect by using my hand.
And that is a whole other story…

BACK TO ME: I must say, EA, I’m always quite the fan of a good tease. Nicely done.