If you think the following post slams my ex in any way, you’re an idiot. Acknowledging someone’s shortcomings isn’t vindictive. And acknowledging that they have good reason to have their faults is also not vindictive.
For some reason, we live in a world where being passive and inaccurate is mistaken for “being nice.” C’mon, none of us is perfect. I burp, you know. I offer advice without being asked (hence this board, heh… gets it a little out of my system. Not entirely, but it helps). I’m opinionated. I’m blunt. I can be moody. I’m bitterly sarcastic. I’m narrow-minded. I’m judgmental.
It’s all true.
So to call me something that’s true is, well, not vindictive in the least. It’s merely right.
I fuckin’ hate how you can’t say anything bad about anything and not be perceived as negative, hateful, or cynical. It’s so fucking stupid. It sucks. They suck. C’mon, grow a fucking spine. Have an opinion. Say what you think. Fuck that, just THINK.
And while I’m all rared up with no place to go, let’s get onto this topic of calling DEPRESSED a “SWIPE” at someone.
Hey, depression’s a fucking ILLNESS, man. Sometimes it can be almost untreatable. It’s a hard fucking road to travel. Calling the stating of a person as “depressed” a “swipe” means depression isn’t a real thing. It’s dismissive of the horrific struggles faced by all those people who can’t understand why they feel the black hell they feel. Don’t fucking disrespect them by suggesting that their clinical state is merely an insult or a swipe, and not the gaping black hell of existence they know it to be, ALL RIGHT?
This isn’t the “wah, I’m having a bad day” depression I speak of, that I know firsthand; this is the “I’m scared to go outside because something might trigger a descent again” kind of blackness that literally puts a fear of God into you.
When I call my ex-boyfriend depressed, I call him that with nothing but tenderness and sorrow. I feel for him. I wish I could help him. There is nothing, not anything, that I can do for him. How I wish I could. I can’t. That’s just the state of depression for you. Somehow you got to find your way out, but this isn’t some spelunking game. This is sinking. It’s a shipwreck of the heart, and shit, man, Lost is going on Season Three, you know what I’m saying here? If you don’t get found, man…
Depression is the bane of my life. I’ve travelled that road too often to feel anything but empathy for its sufferers.
My brother broke my heart last week when he told me he was crying every day these days, missing being a husband and a father, he said. Broke my heart. What do you say to a man who feels so emotionally crushed in the face of his not being able to be the man he wants to be? I believe depression’s harder for men simply because they’re told to not listen to their emotions most of their lives, and here’s this thing of darkness screaming at you every waking moment, or drowing out the noise in your life, and you can’t ignore it. It’s there, always. I think men feel more helpless with it, but women are kind of conditioned to know our body does this to us, and we’re brainwashed to believe we’re the weaker, more emotional sex, so we somehow cope better as a result of it. Men have to bottle it up for pride’s sake, and the price they pay’s just horrific sometimes.
I recommend this brilliant book by William Styron. Brilliant literary take on the journey of depression by one of the best writers in the world. His was chemically induced (though some of us would argue they all, in one context or another, are) and spiralled towards suicide. It’ll wake you up to a more intellectualized and concrete look at the psychosis of depression.
I believe I’ll always be somewhat prone to depression. Now, though, I realize that no matter how dark it gets, I find moments of joy. I need to always remember that.
Anyhow. I wasn’t sniping. This is one breakup where no one really is to blame.
And to the reader who expressed concern that a great relationship could die at the hands of something stupid like a broken leg, well…
…Welcome to the real world. I have been alive for 394 months. This relationship ate up maybe five months of it. And it feels like so much more. The connection went deep, fast, and there it is. Such is life. Broken hearts hurt, and don’t let anyone tell you otherwise. When it breaks, you can hear it cracking. In fact, they did a study last year that proves for once and for all that you really can die of a broken heart.
Yep, Broken Heart Syndrome occurs when there is a sudden tragedy that hits you. A death, a diagnosis, a theft, whatever. It mimics a heart attack and can require hospitalization, after which (2-3 days) the people can leave in decent health.
Every friend I’ve lost, every lover who left or drifted away, every relative, they’ve all taught me something. Some are dead and gone but remain with me now. Some hurt me in ways I’ll never forgive them for but to this day I remember things they’ve said, that we did, and it will always stay with me. 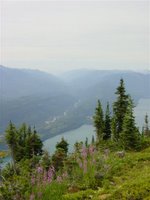 And that’s life.
There’s a valley in Eastern BC, outside a little town called Nelson. The natives there have a legend that it’s the valley of the lost souls. The belief is, when you’re broken in spirit or body, you go there, by the river, and in time, it will heal your soul. When you leave, you leave whole but for the little piece of your soul that remains, and then heals the next broken spirit who happens by. 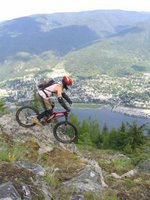 And that’s what love and broken hearts are. You hurt, you heal, and a bit of that experience stays behind to make you better, stronger, than you had been before.
So, my heart’s a little worse for wear, as is my ex’s, and that’s how it goes. We are what we are, broken. And there’s no shame in it.