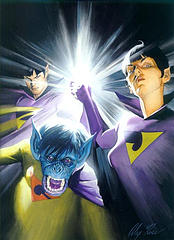 And what do I choose to do with it? Sleep. It would seem Girl has pathological bed tendencies. Someone get a shrink.
No, no. I had a migraine-ish thing. On the list of 817 things you don’t really know about me is the fact that I am the Human Barometer. Yes, a weather front shift looms, and so does a giant barometric flip of the switch in my head, and sometimes I’m felled by these mondo-mofos of a headache.
The Guy is being demonstrated the Evil Mind-controlling Superpowers of that arch-villain, The Office. While he’s out there battling Evil, I’ve been taking a break from my Autocrat of the World role. I “laid down” at nine and just rolled out of bed at 11:32. What am I, 12? I haven’t been to bed that early in quite a while.
Stop the presses, people. We may be on the verge of a mini Dating Dilemma. You see, there is now a great disparity in Me-Time ratios. Me, I’m drowning in Me-Time. I’m all lazy in my Joe Boxers and my hooded sweatshirt, curling my red-painted toes in the chilly spring night air, yawning, and debating between the merits of Bath versus Shower.
The Guy? Trapped in death-defying battle with his dreaded arch-nemesis, The Office, as he slays Deadlines and mocks the Greatly Abhored Accounting Department on the dreaded conundrum of Mandatory Overtime.
Tomorrow, I will be well-rested, and he will be bone-tired, having worked nearly 18 hours or more in a row. Thus, the Great Relationship Inequity shall begin.

[Please, someone, break through the Space-Time Continuum and break my shift-key, will you?]
He is likely to be short-tempered, low-energy, and unwilling to do much. And understandably so. I am like to feel sorry for him, then feel sorry for me being all Boyfriend-Deprived. And understandably so. But it can’t stop there.
This is life. My job as an adult, for this 72-hour period, is to realize he’s having a hard time of it, and I’m, well, lying around in my Joe Boxers and my sweatshirt, having eaten a good bowl of butter chicken . This means, no matter how I slice it, my weekend’s a let-down. But guess what? Guy’s weekend really went from zero-to-blows in about 60 seconds, long, long ago.
The additional fall-out is that sex may or may not be on the books for a few days. And understandably so. Does it mean I’m happy about it? What do you think, Junior Einstein? Oh, that’s right – that’s a big “No!” But I’m an adult, and I’ll deal just fine. I can’t even fathom having to work 17 hours in a row using actual brainpower like the Guy is now. To expect him to function at all like a human in the next couple of days is a tall order, despite whatever superpowers might reside in his pants.
Tonight, I understand. Tomorrow, when my body remembers it’s female and thus emotionally needy by nature, I might feel a sniffly sad thing or two that I’m not going to have the weekend I deep-down-inside want. Whatever. Grown-up powers, activate! (Okay, if you’re one of my collegiate readers and you missed the Justice League of America and the Wonder Twins, well, that’s your problem. You missed the minimum age requirement for riding, but we chose to overlook it. Feel grateful!)
Relationships are full of disparities, and the hard part is being perceptive enough and adult enough to realize when the scales have tipped drastically in one direction versus another. The other challenge is remembering that, while this “weekend” feels like forever when I can’t be with a lover I crave, in the long run, it’s a couple friggin’ days in the life of my relationship, so I need to keep perspective on just how troubling I feel my times really are.
It’s hard to pull your head out of your inner child’s ass sometimes in order to remember just how much there is a big world that rotates around your itty-bitty little existence. If you don’t manage the cranial extraction though, you’re fucked. It’s really that simple. A “woe is me” attitude only gets you so far.
No woe-is-me here. I’ve just been handed the opportunity to get my place dealt with, get out on my own a bit, and live my own life, hence pseudo-single. The Guy’s stuck being whipped by the Man, and those lashes are gonna sting for a few days. This is how the vicious circle spins, and my secret superhero Activator powers are just kicking in. (Insert powerful whooshing SFX here.)
Wonder Twin powers, ACTIVATE! In the shape of… grown-up!

Steff, I have to say it’s kinda’ creepy or something……with you writing about your guy and your guy adding comments to your blog.
I know it’s a free world and people can do anything they want.
But, this Blog is beginning to give me flashbacks of watching the Brady Bunch or something. It’s almost like……is he watching over your sholder all the time or stalking you? Doesn’t he have anything else to do? It’s making me sick!

The Guy makes comments on posts relating to him. Suddenly it seems stalkeresque to that reader, and perhaps others. The comment put me on the defensive, and then it made me think.
The Guy said, “Hey, she posted to my blog first. And what you see as creepy I see as caring and supportive.” I’d have to say I agree. And it’s true, I did comment on his first. (And no, I won’t post the link. You find that shit out on your own, kudos, but I like him being a rather non-distinct entity. It makes him stay more mine, in some weird way.)