My Sunday mornings are something I greatly enjoy. Typically, it involves rolling out of bed sometime around 9 or later, then some lazy TV until I get up the energy to make a nice breakfast. Then, I’ll take my nice breakfast, my coffee, and settle in to watch one of my many movies (if nothing worthwhile’s on telly, and usually nothing is) until the urge to write has struck. 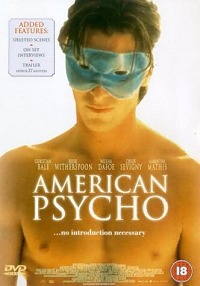 Guess which part of my morning I’m at now? Well, to my right sits too-strong coffee with a bit of milk, and in the VCR is one of my really old videotapes – An American Psycho. My breakfast was eggs scrambled with caramelized red onions and red peppers with sundried tomatoes and basil, and back bacon, and good toast. I’m pretty much in my happy place now. A shower eventually looms, and then a trip out into the world for a Solo Day of Fulfillment.
The movie, a psychological classic, has got me thinking. If you’ve never seen American Psycho, it’s a remarkable study of the psychosis of the Type-A serial killer, chillingly portrayed by Christian Bale. The writing is top-notch (as most of Bret Easton Ellis’ work tends to be) and the acting makes it pretty surprising that Christian Bale ever got another job after that movie, since he became the killer, which generally slays an actor’s commercial appeal. (Much like how accurately portraying Ted Bundy put Mark Harmon’s career in the toilet for a decade.)
As I said, the movie has me thinking. There’s the old cliché, “How well do we really know anyone?” Not very, not usually. We think we know people, but we tend to go on face-value more than any real criteria. There’s a segment at the beginning of the movie when Bale’s character, Patrick Bateman, goes on at length about his skincare regime. The inference is, his face is the only thing people have to go on, and its perfection is his façade, covering his whirlwind of anger, insecurities, and need for approval, all of which drives his merciless, brutal killing of women.
We find “love” by comparing likes. Ooh, we like the same movies, the same books, we have fun the same way, we laugh at the same jokes; it must be love!
The thing is, even the most stark-raving lunatic enjoys culture and movies and has favourite foods they can’t live without. Likes and interests are superficial, at best.
When it comes to people in my life, be it friends or family or lovers, I watch The Little Things. The insignificant things that we often brush aside are the greatest tells as to who and what the people around us are like. It doesn’t take me long to assess a person’s character, and it tends to make me fiercely loyal when I see them behave in respectful, goodly ways.
Ignore the big picture and turn on the macro lens. Do they respect people providing them service in stores and establishments? Do they come to the aid of someone in need? Are they helpful when someone asks them for info on the street? Can they chat amiably with a perfect stranger? Do they ensure they’re including you in conversations with friends? Do they arrive on time, or let you know when they’re going to be late? Do they drive aggressively, tail-gating every car they come upon?
You get the picture. I’m not saying a person should be dumped for any of the above transgressions, but you sure as hell ought to be taking note of it. For instance, one could assume that I have a very quick temper by the way I get so snappish when riding my scooter, or one could at least assume I’m very quick to get on the defensive. And they’d be right. It’s true, I get very defensive. It’s one of my worst qualities. It also speaks to the fact that I’m a perfectionist who overthinks things, so when someone begins to point out a flaw or an error on my part, I might well put up a wall to protect myself. I know this to be my character weakness, and I at least have the guts to own up to it with those around me. It doesn’t make the flaw go away, but at least I’m accountable about it. As flaws go, it could be worse, but it’s still a character flaw.
I’m forever astounded, though, by people who seem to blatantly ignore endless flaws and attitude problems in partners, all because they have ‘so much in common.’
So many of us hide a great deal of who we are. We’re fools if we fail to suspect others might be doing the same. We have insecurities, fears, hatreds, weaknesses, and they all combine for a lethal cocktail at times. How we behave in the Little Moments is indicative of our character at its deepest levels. Yes, we have flaws, but are we inherently good and kind people? Look deeper than the surface. Our daily insignificant actions are the only true evidence we provide – the things we do so naturally that we don’t even think before we act. These are the moments when who we are comes through, and those are the moments to take note of who’s at heart of the person you think you know.