Okay, I’m into the whole love-yoself-sistah feminist self-worship thing and all that, to an extent.
This sort of thing blows my mind. Personally, if I was 12 or 13, and I had a granola-chomping mother who was foisting this “love your period, love your womanhood” crap down my throat, I’d spontaneously combust.
I hate when people take something that’s really inconvenient and annoying and try to exalt some greatness into it. Sure, having a period is a reminder that we’re female and a conscious realization of our ability to create and bear life. Nice, fabulous, wonderful. Will that get the stains out of my bedsheets, too, or is that just a lovely little inconcrete and essentially useless euphemistic piece of bullshit?
Oh, I say it’s the latter. These people are right up there with the fucking naive twits who think a bird shitting on you means good luck. People will tell themselves anything if it means pocketing the cash for another therapy session.
Fuck, man. All I need to remind me that I am woman, ergo I fucking rock, are my tits. That I have a twat is just bonus, okay? My whole fucking body tells me I am woman, ergo I roar. I don’t need to pull a South Park, bleed for seven days, and miraculously stump the odds by living just to know that I’ve got the DNA freebie strand, okay? My period is the bane of my existence. I fucking hate it. I wish I never had to bleed again. I’m presently in the middle of trying to suppress my period for three months at a time, but the three months has been split into six weeks thanks to an unwanted period this week.
Now, a bloody tangent. So, I’m, you know, there on my throne, unwrapping the first of a new pack of pads, and the Always “Wings” adhesive cover tab has “Have a happy period” written all across the fucking thing.
Happy? You want me to be happy about cramps, bloating, irritability, alcohol sensitivity, and the constant risk of staining undergarments, clothing, and sheets for the better part of a week? Yeah, sure, okay, and while we’re at it, you want me to be thrilled about losing my paycheck, crashing my car, and finding my husband in bed with his secretary? Fuck right off.
Goddamned marketers.
But back to the initial topic: I’d like to send a big fuck you out to all the women who try to make me feel guilty about the fact that I think having menses is the absolutely worst part about being female. It doesn’t mean I hate my femininity, it means I hate mood swings and pain and messes and feeling unclean. How is that wrong? Fucking sanctimonious crap is what that is. Get off your high horse and join the rest of us on this little plane we like to call “Reality.”

I was reading something just before bed, stated by the venerable clothing designer Karl Lagerfeld, in answer to the soon-to-come fashion onslaught of heavy, dark clothing that’s to be replacing the light, fun, and airy lines we’ve been enjoying of late. Lagerfeld said, “If you read the daily papers, you are not in the mood for pink and green.”
If you are what you wear, are we as a society becoming depressed? Valium and Lithium and Prozac, oh my.
I’d lay my cash on a big, fat yes, but hey, what do I know? I’m just a formerly depressed not-even-yuppie who’s an observer, not a player. 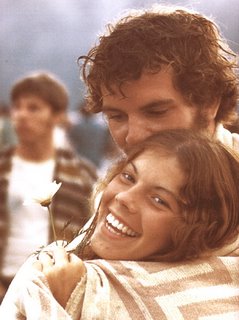 Depression’s out there. Hell, even the upcoming ankle-length hemlines are screaming it. We’re depressed. As a people, we need to get happy. This war shit’s bringing us all down. We got Vice Presidents running around shooting good citizens. Gas prices are nuts. The Canadian economy’s strong enough to be a steamroller. Clearly, it is the end of times, and our nerves are a tad frazzled.
Me, I say the cure is sex.
Okay, let’s look at this, then. Stress and self-esteem issues, as well as external factors (thus the stress) cause depression, as do biochemical issues. Right? Sex is good for the nerves, great for the self-esteem — (especially if you can get ‘em to scream your name. Hmm. I really have to stop falling for the strong, silent types. My ego’s taking a hit.) – and releases endorphins.
In all seriousness, studies have shown we’re all at an all-time touch deficit. I’ve been hooking up with some guys of late, lots of great dates, no seconds, but I’ve kissed (uh, to coin a phrase) every one of ‘em. Life’s too short not to share a kiss (or something) or stretch it out over three or four hours. Sex? Nice but not needed. Making out does wonders for the self-esteem. Gets the juices flowing, the pulse racing. It’s the very definition of alive. No one should have to go without. I’m going into withdrawal, days without a kiss. A necking session would hit the spot, but I know what else would, too.
In a world where there’s famine and war and natural disasters and poverty and stupid religious extremism and pettiness… shouldn’t you at least be getting laid?
I for one applaud the relatively recent revival of the “Make Love, Not War” campaign. I need to get me a button, man. I’m willing to sacrifice myself to the cause. I will have sex in the name of peace, and soon. Afterwards, we’ll spoon, smoke a joint, drink some absinthe, and listen to Imagine, followed by White Rabbit, and some Dark Side of the Moon. Is there anybody out there?
Maybe this whole Iraq thing was just what the Sexuality Movement needed. Drop some bombs, shed some innocent lives, get the tempers flaring back home, have the pacifists realize they’re really pissed off but since they’re pacifists, they can’t go out back and shoot beer cans off the fence, so, instead, they smoke fatties and fuck.
Who knows. Maybe Bush did the right thing after all. I don’t fucking know. I do know that everyone getting a little more action would probably be not such a bad thing. Me, I always liked the fact that Clinton was getting head in the Oval Office. I figured he’d at least be relaxed enough to make the rational choice in any scenario that unfolded.
I think anyone in power with lives in their hands should absolutely be on a sex quota. They must be gone down on once every eight days, minimum, and are entitled to sex twice per week, minimum, with no less than 28 minutes foreplay each time. Sure. As a start. With time on the job, age, and increased responsibility, the sex allotment increases. Like a health plan or any other benefit.
Yeah, I don’t know what the hell the problem is, but I know sex is the solution.
Pity the new fashion scene’ll be here soon and skin will be a thing of the past. But, brothers and sisters, we shall overcome. Right?
*Yeah, I’m a pinko lefty with a loathing for the war and a disdain for both the American and new Canadian regimes. I mean, does it sound like I have conservative sex? C’mon! Get real. You knew this. You like me anyway. I’m the good kinda libertarianish type.